This project was created for the Udacity VR Nanodegree program where students were asked to complete a design and development cycle for a simple VR puzzle game.

The goal was to work on a basic user interface and game elements within VR that would work with people who are new to VR. This involved user testing and several iterations to create a comfortable and enjoyable experience.

Puzzler shows a random pattern to the user that they must repeat back correctly to move on. The user is provided audio and visual feedback on their selections. 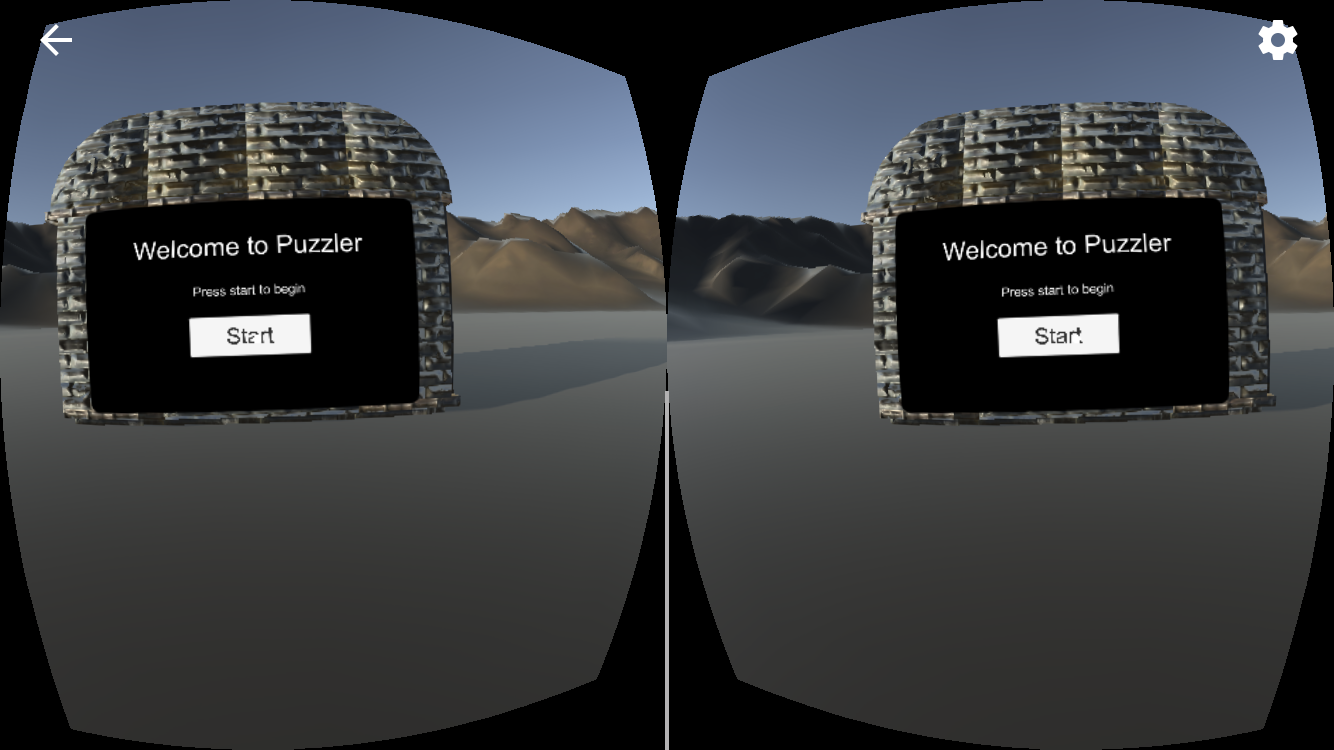 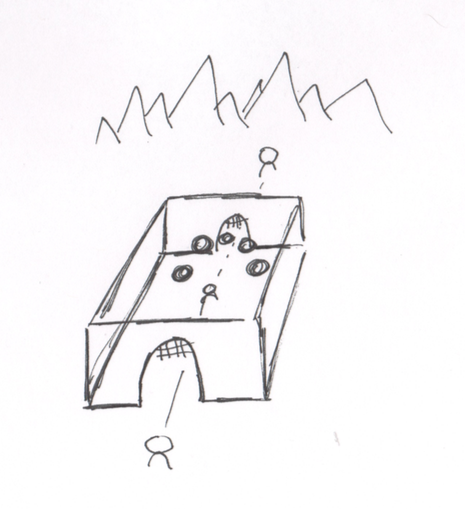 For testing, to match the demographic of our target user, I chose three friends who haven't used VR before. I decided to not repeat any testing sessions with the same user to get "fresh" opinions and experiences for each test.

An iPhone 7 paired with Google Cardboard was used for all testing sessions.

The first user test was brief and meant to test the scale and overall mood of the environment before getting too far into the process. 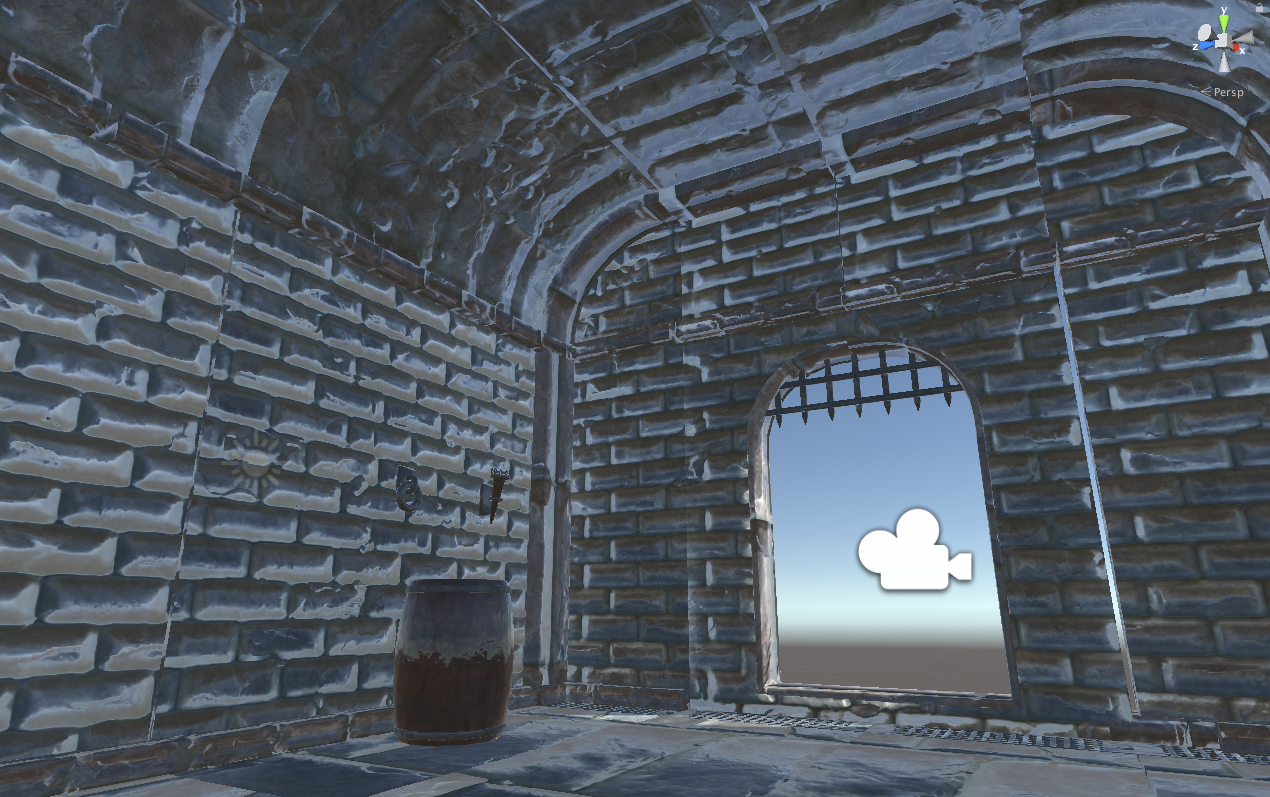 When asked about the overall scale of the room, Marie stated that she felt small in a large castle room. The mood of the room felt "cold and empty". Marie noted that the game felt "broken" since there was nothing outside of the room.

After this test, the player camera was raised to 1.7 meters from its original 1.4 meters and the scale of the room was reduced by 10%. Lighting and additional props were added to the puzzle room. Finally, a mountain environment was added outside of the room to add to the overall mood of the game.

The second user test was primarily focused on core game mechanics, but I also took the opportunity to test the solutions brought up in the first test to see if those issues were resolved.

The primary game mechanics being tested were:

Thomas said that the placement of the start and restart messages felt uncomfortably close but didn't have any difficulty in understanding and interacting with them. 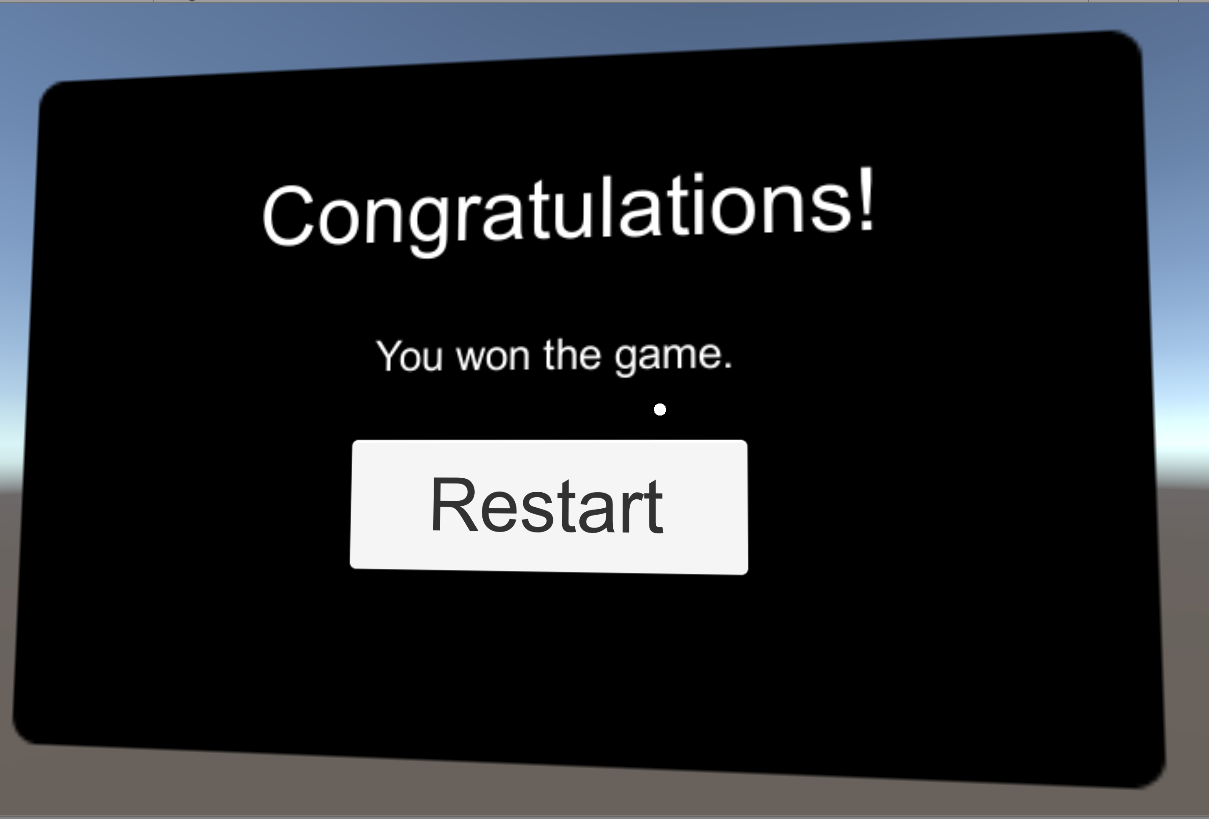 When asked about the overall scale of the room and his own perceived size, Thomas said that it seemed normal to him. By this time, lighting and props had been added to the puzzle room. According to Thomas, he felt like he was in a "creepy castle." 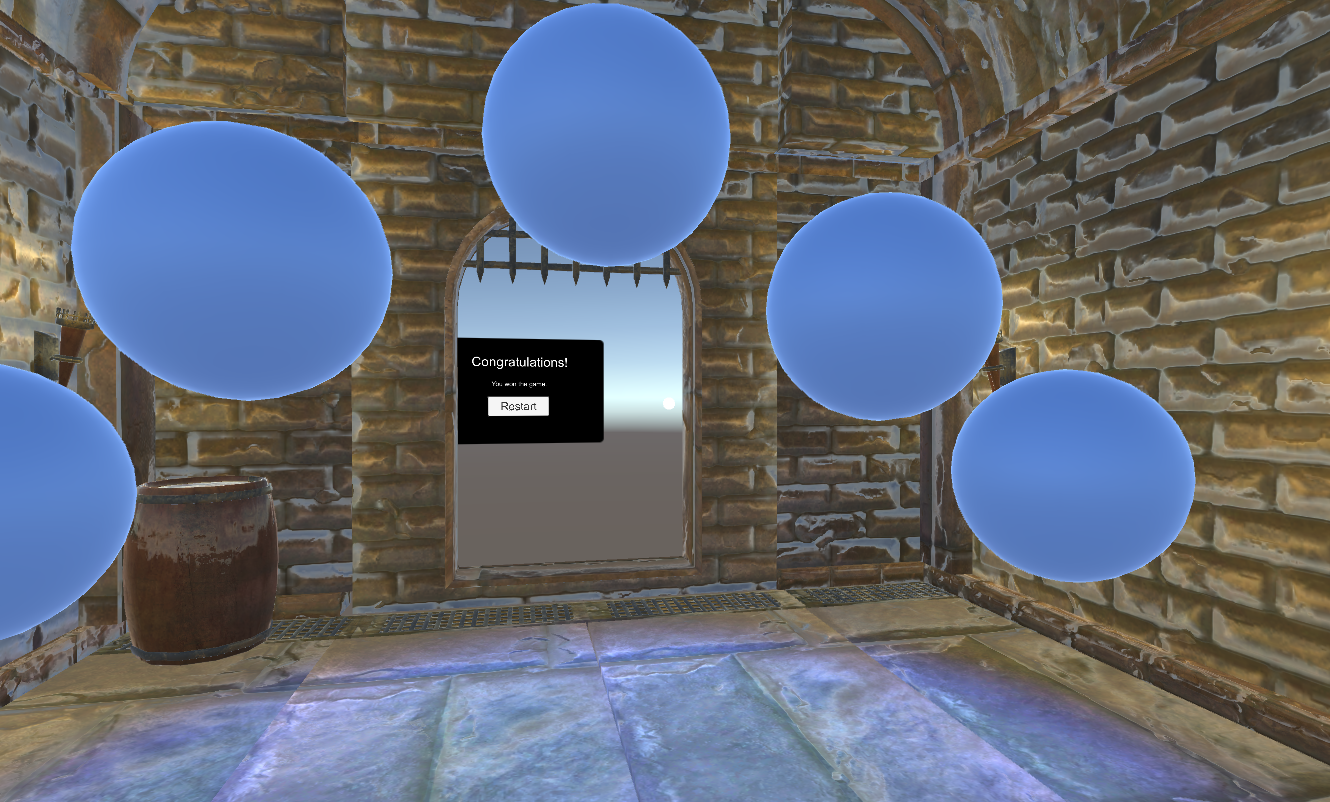 As a result of this test, player movement speed was increased by 25%, the player camera and waypoints were moved further away from the start/restart messages, and the orb size was decreased by about 33%. Jessica was able to enter and exit the puzzle room without any difficulty. The revised placement of start/restart felt fine to her. Jessica did click on the wrong orb for the first try and the "Incorrect Selection" was much louder than the other audio.

As a result of this test, audio for the "Incorrect Selection" was decreased by around 50%. No other changes were made.

The overall environment is set in a desolate and empty desert surrounded by mountains. The goal is to provide an attractive 360 environment, but not distract the user from entering and playing the game. 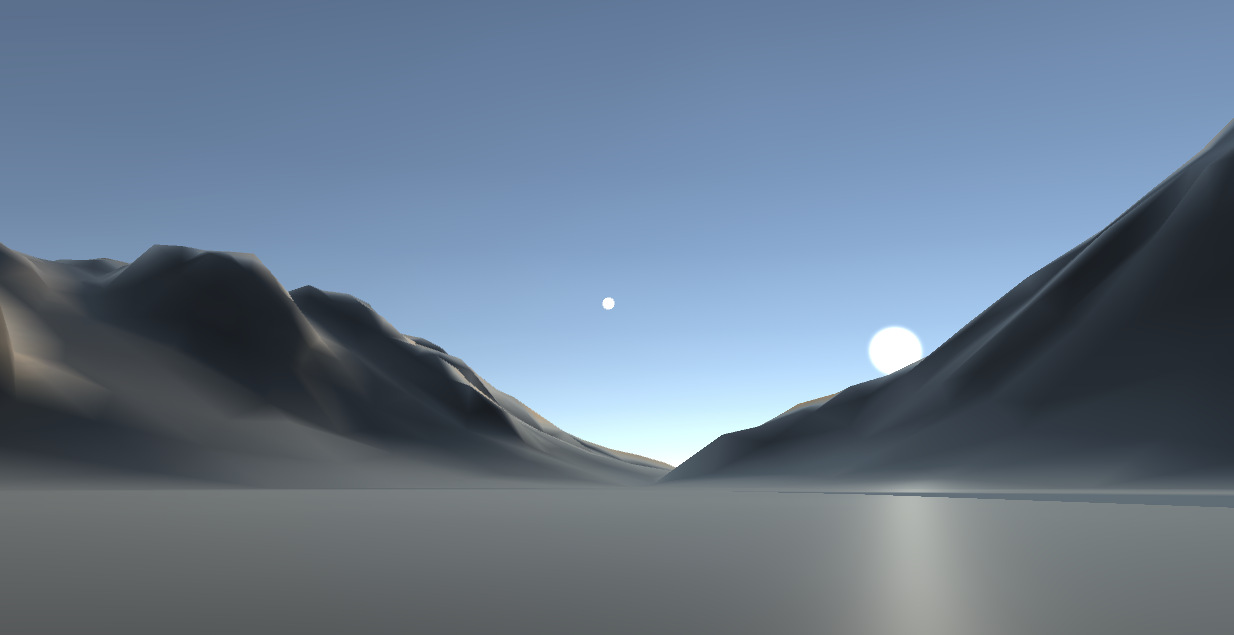 The indoor environment is set inside a dimly-lit dungeon. The goal here is to provide an interesting environment, but not one that a player necessarily wants to stay forever in. 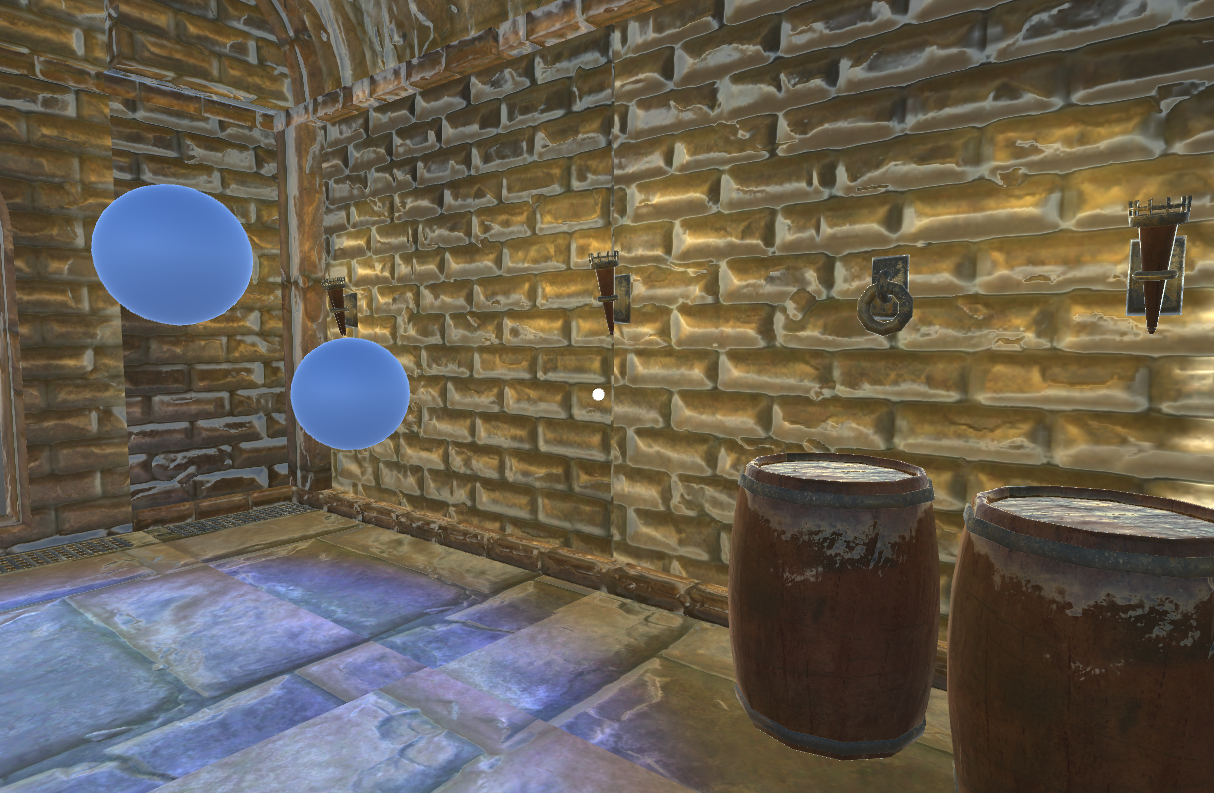 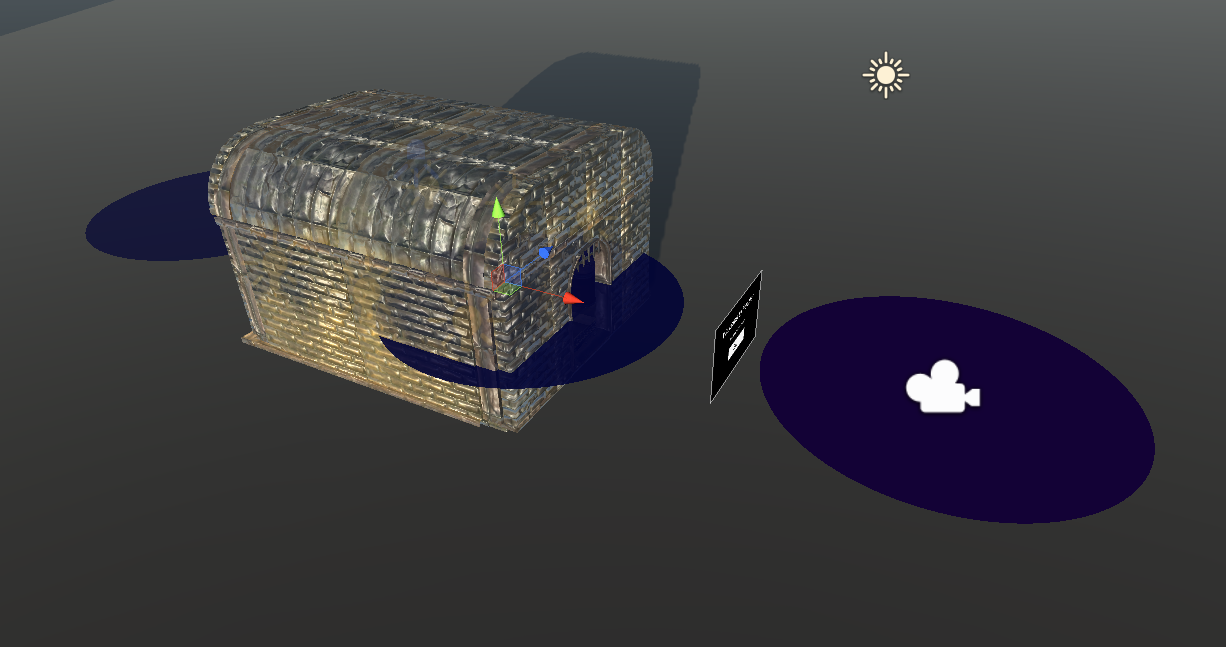 Mobile VR, like Google Cardboard, is limited to 3 degrees-of-freedom. This means that the user can look around in any direction, but cannot walk around in the environment.

Waypoints were used to move the user from the beginning, to the playing area, and the end. This is a more controlled user experience than allowing the user to travel anywhere in the environment.

After the player enters, the game demonstrates the correct answer by using a highlighted orb texture and playing a sound for each part of the pattern.

If the user selects the correct pattern, they will be taken by waypoint to the end where they have the ability to restart the experience if they want. Feedback is provided to the user by highlighting an Orb when their reticle is over it. If the user selects an incorrect orb, an "Incorrect Selection" sound is played and the pattern is restarted.

Conclusion and Next Steps

This project especially highlighted the value of user testing and iteration for VR. What looks fine on the desktop can be completely uncomfortable when experienced through a headset.

While this project is basic, it can be expanded on in the future by including different levels with increasing difficulty. Other puzzle types could be included to test out new interaction methods.

I recently watched a great talk by the Google Daydream [https://vr.google.com/daydream/] team about designing screen interfaces for VR. Adam Glazier [https://twitter.com/AdamGlazier] and Chris McKenzie [https://twitter.com/matchingponies] dove into some of the challenges and pitfalls around creating two-dimensional screens within the VR

Design is all about understanding other’s perspectives and using that knowledge to come up with a solution for a given problem. We may focus on the user, spending time immersed in their environment to better understand their problems and motivations. We may also keep business objectives in mind, crafting

Jared Spool stated that the easiest way to to achieve a dramatic improvement in your user experience was to increase your team's hours of exposure to real users. Based on his observations, he recommended that everybody in the product team should have frequent exposure to users, a minimum of 2